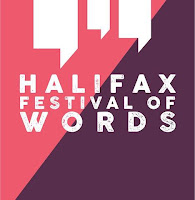 Looking forward to reading not such much a taster as a nibble of Book one of the Fixpoint series as part of Late Night Turn The Page at the Halifax Festival of words on the 5th of October.


Turn The Page is a poetry and word night at the Book Corner. Founded and hosted by Katie Atkinson and co-hosted by Katie Ashwood. They are very excited to be returning to the festival after last year’s sell out event.

A full programme for can be found at the festival website.
at 11:39:00 No comments: 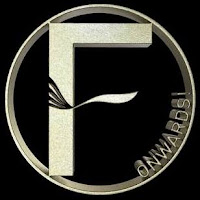 While visiting Fantasticon in August, John Hoggard and I spoke to Best-selling author Danuta Kot about the release of the Latest charity anthology from Fantastic books publishing: The Forge: Fire and Ice.

This is a Dystopian Sci-Fi anthology and contains contributions from myself, Danuta and John.

Like many of FBP's previous anthologies, this generates a donation for a nominated charity - in this case the UK's largest Fibromyalgia Charity, Fibromyalgia Action UK.

Danuta Kot: Welcome to the launch of Short Story Anthology, Forge: Fire and Ice. Two of the authors have agreed to come up onto the stage and talk about the book with me. So, I think we should get started.

Danuta Kot: So, first of all, I'd just like to ask two of the authors to say a little bit about the stories they wrote. So, John, how did you interpret fire and ice? 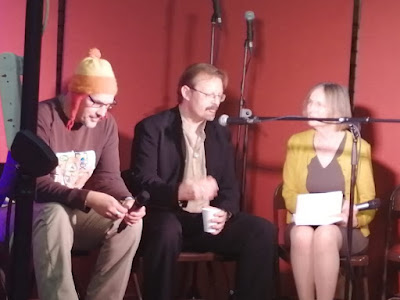 John Hoggard: Well, for me, and I confess that one of the editors when they sent it back said "this story seems to have come out of a novel." And I was like: "yeah it did actually." So, my story, Fire and Ice, [began a] really long time ago in my teens, long before YA was a YA thing, I start to write a novel, about a group of kids who get sent into another world and I wrote about 180,000 words, and I just went "yeah, this isn't going anywhere." So I just stopped.

John Hoggard: But I really liked some of the characters and I liked the idea of that fire and ice, so when the idea of the Fire and Ice anthology came out I went "I think I'll blow the dust off that." And sure enough, it took a little bit of shoehorning, which the editors spotted, but I did get it down into that concept of two dynamically opposed elementals, which is how I interpreted the story, being trapped in a single object, which was a sword. It was the story of how that sword needed to be reforged into its two base components so that it could do a mission. So that's my interpretation of fire and ice.

Danuta Kot: Thank you, John. Okay. And our second author is a short story writer and novelist, C M. Angus, and when I read your story, the saying "if it's too good to be true, it probably is," sort of came through my mind. I don't know if that's a fair assessment. But would you like to tell us something about your story?

C M. Angus: Absolutely. With Fire and ice, I took the view, not of a literal interpretation of fire and ice, but tried to make it more of a commentary. The idea was that you could be fired, and put in suspended animation, literally fired and iced.

C M. Angus: With that, one of the things I tried to do was work things in a number of levels, so you might notice in the story no one's got a name, none of the characters have any names apart from the computer. It's a very dystopian way of looking at things, where apart from the artificial intelligence, no one's got an identity, no one seems to care who the character is, or where he's come from. Unfortunately the way that society is going recently seems to have a lot of these trends. The idea was to create a social commentary while still being entertaining at the same time.

Danuta Kot: Thank you. You've both just touched on something that I always think is important with short stories. That, I mean, though all three of us, novelists as well as short story writers, that in a novel you've got a lot of space, you can move around, you can explore a lot. In a short story, every word counts. And as you were saying, the simple fact that the characters, your characters, don't have names, carries a tremendous amount of information.

Danuta Kot: John, which is more difficult to write for you, a novel or a short story?

John Hoggard: I think for me, the writing of the novel was fine, but editing a novel is terrifying. Whereas, writing a short story, and for me I write an awful lot of flash fiction, which is even shorter format again, so for me I find short story writing easier because I can go "I didn't like that, just bin it." Whereas with a novel I go "I've written all of these words and they've got to go somewhere." So, I feel obliged to keep editing until it's right. But with the short stories, sometimes you just go "no, it's not working." And you're just prepared to move on from it. So for me, short story writing's easier.

Danuta Kot: What do you think, C M. Angus? 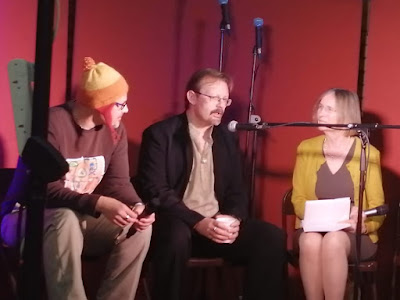 C M. Angus: I agree. If you're writing a novel you're agonizing about "am I doing justice to the characters? Am I doing this right?" With a short story, because there's often a deadline, you can realize "It's the day of the deadline and I haven't started yet." And then you've got three hours to do this thing, and sometimes the best ideas go when you're under the most pressure. And when you try to do something that is really to the point, being under pressure, working to a deadline, really helps.

Danuta Kot: One of the things that struck me when I was reading The Forge; I used to be a major sci-fi fan when I was in my teens and early 20s, and then science fiction and fantasy were on the whole a very, very optimistic genres, despite 1984, A Brave New World, on the whole authors saw the future as a good place to be, and they saw science as something that benefited humanity completely. When I read The Forge, I thought "no, everything's changed." This is true with so much sci-fi, it's dystopias, it's apocalypses, or an incredible takeover by cynicism and big business. What do you think about that, C M. Angus? How does it strike you?

C M. Angus: I think that's true, but I think, as ever, Art is just a mirror of society. I think it says an awful lot that 50 years ago, this year, we were putting men on the moon, and the absolute optimism in the same year, you had things like Woodstock, the optimism there of things could be wonderful, and things could be better, was a sign of the times. And then carried through, almost ten, twenty years afterward. Now, fast-forward now, you've got the banking crisis, you've got Brexit ripping everything apart, climate change, then it is no surprise that one of the main genres in movies is zombie movies. It is the Apocalypse, because people want that escapism, they want something that in some level mirrors their experiences. I think it's a little bit depressing, but I think it's just a mirror of society.

Danuta Kot: Yeah, I would agree with you there. What do you think, John?

John Hoggard: I agree. I mean, I grew up reading my dad's science fiction as a kid, so he gave me Asimov, Archur C. Clark, EE Doc Smith. And it was shiny and it showed that the human race had gone beyond the Earth, and was pushing out into boundaries, and discovering new planets, and was just being pretty good about to. And look at what we do to the Earth Mark 1, in the moment, I'm thinking we have the science, but as a species we don't seem to have the will to make the changes to actually make it better. [We were] going to change the world, [with] clever layers of technology. And none of it has come to pass, mainly, I suspect, because we're really good at doing what we've always done, which is just getting by. And that doesn't leave very much to progressive species.

Danuta Kot: It's a real shame we haven't got Earth Mark 2, it seems really we could do with it right now.

John Hoggard: We'd screw that one as well, I'm afraid.

Danuta Kot: I was rereading John Wyndham recently, very excellent sci-fi writer, and I reread The Chrysalis and The Kraken Wakes, and I noticed that these are dystopic novels that head inexerably towards doom and apocalypse, very well done. And yet right at the end in both cases, he tags on not quite a happy ending but hope. Almost as if, in those days, people couldn't face the prospect of the end. These days, I think we're much more ready for it. And I think The Forge: Fire and Ice, these stories reflect that in a whole range of ways, through the darkest of stories to some very dark, wonderful humour. Anyway, thank you for listening. Thank you both for this conversation.

John Hoggard: Thank you very much. 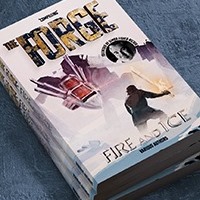 The Forge: Fire and ice is published by Fantastic books publishing and available now as e-book and paperback from Amazon and other sellers.

CM Angus grew up in the North East of England and now lives in Yorkshire with his wife and children.

He is interested in all things creative & technological. Having previously published technical non-fiction, he is currently working on his first novel under the working title Fix-point - a speculative-fiction spanning 3 generations of one family haunted by an approaching alternate-reality where their children have been erased from history.